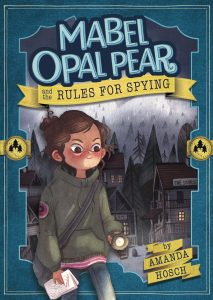 Today I’m shining the Author Spotlight on Amanda Hosch and her debut novel Mabel Opal Pear and the Rules for Spying.

Title: Mabel Opal Pear and the Rules for Spying

Please tell us a little bit about your book.

Fifth-grader Mabel (code name Sunflower) wrote the Rules for a Successful Life as an Undercover Secret Agent, so when her parents leave town abruptly she is not too worried–but when her beloved Aunt Gertie is arrested, and her objectionable Uncle Frank and Aunt Stella (Frankenstella) and her annoying (but clever) cousin Victoria take over her house and the family’s private museum, Mabel begins to smell a rat and she is determined to find out what her suspicious relatives are up to.

What inspired you to write this story and/or these characters?

I’ve always loved mystery and detective stories. Mabel’s voice came to me one summer. It was very strong and very sure. Her parents were secret agents, she knew their secret, and was struggling with balancing their secret and trying to live a normal fifth-grade life.

Everyone says writing is a process. Could you share a little about your writing and/or research process?

Usually, I write the first two or three chapters to see if the narrator has a story to tell. If I find it interesting, then I plot out the rest. Mabel’s voice was so strong in the first few chapters that I was able to outline the book in a day since I knew exactly what she would do. The short outline had perhaps two or three sentences for each chapter. The first draft took about six weeks. After I was done the first draft, I double-checked some of the fact and trivia, and then revised (of course) and revised some more.

We know no writer is created in a vacuum. Could you tell the readers about a teacher or a librarian who had an effect on your writing life?

How much time do you have? Seriously, so many people encouraged my love of reading and writing, starting with my mother.

Miss Linda from the Nix branch of the New Orleans library system. She let me hang out in the “teen” section, which was only two bookshelves and always recommended new books for me. She taught me about the wonders of interlibrary loan. In fact, I was a library volunteer during the summers of my middle school years.

What makes your book a good pick for use in a classroom? Is there any particular way you’d like to see teachers use it with young readers/teens?

Mabel is a typical fifth grader and she’s studied US geography and state capitals (which come into play for the plot), but her secret super power is observation. She really sees what’s going on and trusts her instincts. I’d love to see MOPRS used as a way for students to strengthen their own powers of observation.

I’m a little dog obsessed here at www.patriciabaileyauthor.com. Would you tell the readers about your favorite dog (real or imaginary)?

When I was about three, we brought home a shaggy black street mutt from Audubon Park. His real name was Reginald, but I called him Puppy. He was the smartest and most loyal dog ever. He was a street mutt at heart so he would eat anything (crayons, rubber bands, bananas, loafs of bread, frozen whole fish). However, he was also super-obedient. One day, my brothers and I put our full lunch plates on the kitchen floor, told him “no,” and walked into the other room. He sat next to the plates, quivering, but not eating a bite. My mother was not pleased with our experiment, and we had to give Puppy the ham from our sandwiches as reward for his restraint.

I’m an EFL/ESL teacher (English as a Foreign Language/English as a Second Language) and taught abroad for almost a decade: Canada, South Korea, Czech Republic, and Taiwan. Originally from New Orleans, I now live in Seattle with my husband, our two daughters, and a ghost cat. We recently added two former shelter cats to our family. When not writing, I volunteer at the school library or work with struggling readers.